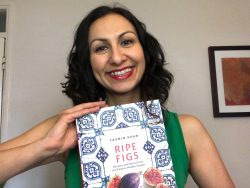 So here it is, the culmination of almost 3 years of work, my new book Ripe Figs: Recipes and Stories From the Eastern Mediterrean is published in the UK today. (US friends, you will have to wait until May 4th, not long to go!). This is perhaps my most personal book to date, and certainly in my mind, my most ambitious, drawing across regional and cultural influences to tell the story of who we are as a species, why we travel for our survival, and what identity means in an interconnected world. 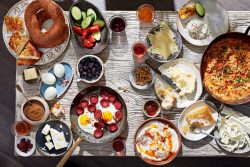 The recipes in the book are ones that are inspired from my journey through Greece, Turkey and Cyprus. It’s a journey through clay-red soils, air that carries the fragrance of orange blossom and thyme, and hundreds of conversations over small cups of dense and sweet black coffee. As ever with my books, I’m eternally grateful for the people who welcomed me into their homes and offered to break bread with me and share the stories of their lives in the hope that it would enable us all to better understand the world that we live in.

For thousands of years, the Eastern Mediterranean has bridged cultures and continents through empire, trade and migration. To think of the countries of Greece, Turkey and Cyprus is to conjure up images of cobalt blue skies and shimmering seas, sun-drenched islands filled with olive groves and citrus trees, and mezze-laden tables with crisp rings of calamari and cigarillos of rice-stuffed vine leaves, all washed down with fiery anise spirits that make you cough and splutter. It’s a place where family is central, tradition is honoured, myths are revered and meals are meant to be savoured, slowly, and always with good company. 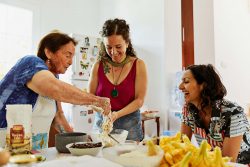 It is also a region, which is changing (as all the world is constantly changing) through migration – an essential part of what it means to be human and what our species has always done for its survival. And so it was, that as I watched, with increasing horror, the heart-breaking scenes of refugees risking their lives to cross the Mediterranean Sea in recent years, I started wondering about the stories of the migrants who were travelling through the region, and what borders mean in a globalised world. At the time of writing, an estimated five million refugees have come through Turkey, Greece and Cyprus since 2015, making it the biggest movement of people that Europe has seen since the Second World War. This is a huge number by any standards, but perhaps just the tip of the iceberg in terms of the kind of migration our planet might see as the climate and financial crises escalate, or if we face another health pandemic. Migration, and how we deal with it, is one of key issues of our times. 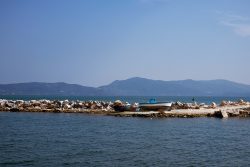 The Eastern Mediterranean is in some ways a microcosm of this issue, encapsulating in miniature the challenges that many countries around the world are now facing. How, in the 21st century, do we deal with the fact that humans have always needed to move and always will move? And how can we update our narrative and our concepts of borders, states and identity so that people can live, and move, in peace and dignity?

So I set out on a mission, to see what I could learn from travelling through Greece, Turkey and Cyprus – eating, drinking and cooking with people from all walks of life.  While the recipes in this book are inspired by the experiences I had and the people I met, they are all my own, and were created in a London kitchen using techniques that are modern and accessible. The stories reflect my understanding of a crisis that is unfolding and that we simply can’t ignore. It is my hope that this book and its recipes will start a conversation about these important issues and – as far as I’m concerned – there is no better place to talk than at the dining table.

At a time when foreign holidays are impossible, I hope this book enables you to vicariously travel to the sunny shores of the Med with these recipes that unite around thickets of dill and bunches of oregano, zesty citrus and sharp pomegranates and sweet dates and soothing tahini. I also hope it enables you to perhaps ponder the commonalities we share, where political leaders would like to tell us there are divisions, and maybe, it will allow you, just for a moment, to imagine a world without borders.

Ripe Figs: Recipes and Stories from The Eastern Mediterrean is out now

US press enquires Will Scarlett wscarlett@wwnorton.com

‘Once again, Yasmin Khan invites her readers to the table for both the dishes she serves and the stories she tells, serving food which is delicious and celebratory, as well as hard-hitting but hopeful stories’ Yotam Ottolenghi

‘An inspiring, joyous, celebration of food and migration. Beautifully written and delicious. I love this book’ Padma Lakshmi

‘A brilliant cookbook that reveals the often overlooked plight of refugees and immigrants. Yasmin is a masterful storyteller who reminds us to keep an open heart and mind’ Nik Sharma, author of The Flavor Equation

This website uses cookies to improve your experience while you navigate through the website. Out of these, the cookies that are categorized as necessary are stored on your browser as they are essential for the working of basic functionalities of the website. We also use third-party cookies that help us analyze and understand how you use this website. These cookies will be stored in your browser only with your consent. You also have the option to opt-out of these cookies. But opting out of some of these cookies may affect your browsing experience.
Necessary Always Enabled

Any cookies that may not be particularly necessary for the website to function and is used specifically to collect user personal data via analytics, ads, other embedded contents are termed as non-necessary cookies. It is mandatory to procure user consent prior to running these cookies on your website.